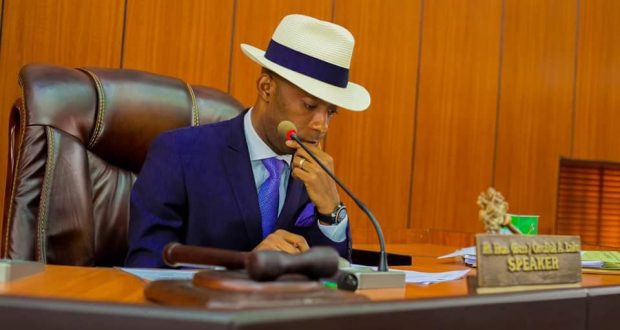 The outgone Speaker, Akwa Ibom State House of Assembly, Rt. Hon. (Barr.) Onofiok Luke said he was proud of the 6th Assembly in the last four years being acknowledged as one of Nigeria’s most vibrant State legislatures.

The former Speaker spoke at the last plenary and valedictory session of 6th Assembly, where he thanked God, the religious institution, lawmakers and all staff members for their support which culminated in the recorded success story of the House.

He also acknowledged that the House did not disappoint democracy, Akwa Ibom people and the Constitution of the Federal Republic of Nigeria, but fought and won battles against forces that would have wrecked the ship of the State’s destiny through personal dreams and ambitions.

“When we first began this legislative journey, the point which we have arrived today may have looked very far in our estimation. But here we are, widely acknowledged as one of Nigeria’s most vibrant state legislatures.

“It is with pride and without any fear of contradiction that I make bold to say that the 6th Assembly, by comparative assessment of today and yesterday when we came, has not disappointed Democracy, Akwa Ibom people or the Constitution.

“It is also pertinent to state that in the last four years we have fought and won battles against the forces that wanted to wreck our ship of destiny in the turbulent ocean of personal dreams and ambitions”. Barr. Luke who will not be part of 7th Assembly but has moved to represent Etinan Federal Constituency at the Federal House of Representatives said.

Barr. Luke lauded the modest achievements of the House and charged 7th Assembly to give optimum support to Governor Udom Emmanuel devoid of compromise.

He further appreciated Governor Udom Emmanuel, peoples Democratic Party for availing them the platform to represent their constituents and also lauded members of the press for a cordial working relationship with the legislature.

“Let me also state here that I owe a massive gratitude to our governor, Deacon Udom Emmanuel. He has been an ally in nurturing a viable legislature. Indeed Akwa Ibom state has found a true democrat in the man whom God has given to us at a time like this as leader, His Excellency, Deacon Udom Gabriel Emmanuel.

“The People’s Democratic Party, our great party will always be applauded for the sound political platform and support it has been providing. I thank our party Chairman Obong Paul Ekpo for his unifying disposition and the spirit of love which he has instilled in the party.

“Gentlemen of the press, I thank you for your support. Media attacks on the legislature which were commonplace in the past never surfaced in my tenure. I thank you for being true friends, good developmental partners and lovers of progress. Thank you for extending to this entire assembly the goodwill which you have shown me all these years. I pray God to bless and reward you for your good works and urge you to keep on partnering with me as the stakes are now higher. I implore you to show similar solidarity with the leadership of the 7th Assembly as well as the leadership of our dear Governor. Remember that he must succeed for all of us to succeed”. Barr. Luke praised.

Earlier on, members of the 6th Assembly took turns to appreciate the leadership prowees of Barr. Luke and the support of Peoples Democratic Party in the State.

Hon. Samuel Ufuo of Mbo State Constituency said: “I want to thank the State Chairman of Peoples Democratic Party, Mr. Paul Ekpo for his support over these years, I pray God to continually bless you in your future endeavours.

“I thank the Speaker for the healthy Assembly we have, thank you for always sending me to represent you in most of those functions. Let me also appreciate my consituency for the rare privilege to represent them, above all, through thick and thin, God’s grace kept and saw me through”.

The former House Leader, Rt. Hon. Udo Kierian Akpan who will be returning to House for a 3rd term in the 7th Assembly commended the press for contributing to the success of the House. Let me also thank the Executive Governor of Akwa Ibom State for giving us the enabling environment to operate”.

Rt. Hon. (Barr.) Ime Okon who represented Ibiono Ibom said: “Mr. Speaker, I want to appreciate you for your leadership qualities, as I stand here today, I am proud to have contributed to the growth and development of Ibiono Ibom, nay Akwa Ibom State.

On his part, Rt. Hon. Aniekan Uko who was the first Speaker of the 6th Assembly for a b period of six months added: “Mr. Speaker, as the 10th Speaker and the 1st Speaker of the 6th Akwa Ibom State House of Assembly, I told my people when I was campaigning that I will represent them as a statesman not as a politician.

“Mr. Speaker, that is why when I came back to this chamber, I took a vow that I will remain in my honour.

“That means I will not attend to anything that will disqualify me from that status, and that by the grace of God I will give quality representation to my people, God on my side I think I have done that”.

Rt. Hon Friday Iwok, for Abak State Constituency, appreciated God for seeing him through eight years of representing his people at 5th and 6th Assemblies despite all odds.

According to Hon. Asuquo Archibong of Oruefong/Oruko, God has a way of controlling the affairs of men and the emergence Barr. Luke as the second Speaker of 6th Assembly was divine. He appreciated Barr. Luke for his sterling leadership style that bonded the House for its success story.

Also, Rt. Hon. Nse Essien of Onna State Constituency said: ” want to appreciate God almighty who in his wisdom made me to come to Akwa Ibom State House of Assembly. Let me also appreciate the Executive Governor of Akwa Ibom Stste for his wisdom and support, he been of immense support to me in the state legislature. Let me aslo thank the people of Onna State Constituency who decided I represent them in this hallowed chambers in 6th and forthcoming 7th Assemblies”.

Further speaking, Rt. Hon. Mark Esset for Nsit Atai State Constituency said: “I very proud of the Sixth Assembly that we have come full circle without any scandal, it the Lord’s doing. I have made new friends in the coruse of my legislative business in this House and I want to appreciate my colleagues for their support over these years”.

From Rt. Hon. Princess Mfon Ekong of Nsit Ibom State Constituency, ” I am proud to have been a member of 6th Assembly. I appreciate God, the leadership and members of 6th Assembly, my constituents and family, Executive Governor and the PDP structure for their love and support over this four years, for us to finish alive, I say thank you Lord”.

The 6th Assemblymen in the likes of Hon. Effiong Bassey- Oron/Udung Uko and the First Deputy Speaker of 6th Assembly, Rt. Hon Usoro Akpanusoh-Esit Eket Ibeno, Hon. Otobong Akpan of Ukanafun, Hon. Aniekan Bassey-Uruan, Hon. Uduak Ududo-Ikot Abasi/Eastern Obolo, Rt. Hon. Idongesit Ntekpere-Ikot Ekpene Obot Akara, Barr. Aniefiok Dennis-Etinan, Hon. David Lawrence-Eket, Hon. Emmanuel Ekpenyong-Ini, and Rt. Hon. Felicia Bassey rolled out some of the giant strides of 6th Assembly under Rt. Hon. Aniekan Uko and Barr. Onofiok Luke to include; presentation 53 bills, over 40 motions which has produced more than 100 resolutions, ranking top being the resolution naming the airport after His Excellency, Arc. Obong Victor Attah. Out of the 53 bill, 32 have been passed into law with others are at advanced legislative stages.

However, The 6th Assembly, inaugurated on the 8th of June 2015 with 26 members came full circle with 21 members, although 20 of them attended the final penary and valedictory session of the Assembly,
as the seat of Hon. Monday Eyo of Uyo State Constituency was sited vacant from commencement till the end of the special plenary.

Eleventh (11) members of 6th Assembly including Barr. Luke and his deputy Chief Whip, Barr. Ime Okon will not be part of 7th Assembly that is about to be inaugurated today, Monday, June 10, 2019. Also, of all the members of the 6th Assembly, Barr. Onofiok Luke is the only member proceeding to serve in the higher Chambers of Federal House of Representatives.