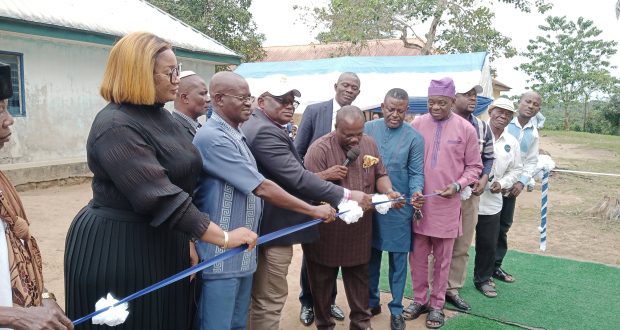 Speaking during the handing over of the borehole to the school, Chief Executive Officer/ Founder, Engr. Godwin Etim indicated that the facility will go a long way to address the water challenges school students and staff face in that enclave.

Engr. Etim who was represented by Barr Godwin Idomo, expressed the hope that the facility will bring to an end the shortage of water experienced in the school over the years.

In the words of Barr. Idobo “We were here during the last inter-house sports competition, were the chairman of the foundation Engr. Godwin Etim was touched by the difficulty encounter by students to have water, considering the very difficult terrain the school is situated and decided to provide them with water which to the glory of God have been completed and ready for commissioning today.”

In his welcome address, Principal of Ukpaubong Community Secondary School Mr. Edem Sampson said the borehole is meeting them at the point of their need, expressed confidence that the water will last “till infinity”

“The coming to live of this project is out of love,sheer determination and perseverance. Getting underground water in some parts of Itu is like searching for water in the desert, we thank God that the efforts, time and resources were not in vain, as the water here may last till infinity.”

The school administrator, while commending Engr. Godwin Etim humanitarian reach to advanced the course of education,call on other well meaning Akwa Ibom indigents to also intervene in area of more class rooms, computers, laboratory seat and more, to catar for the influxes of population of students.

Speaking, the Executive Chairman, Itu local government Area Barr. Etetim Onuk who performed the commissioning, said Engr. Godwin Etim’s kind heart is so rare, described his as God’s sent to Itu. “I must say that Engr. Etim provide this water not because he is so rich but because he believed in touching humanity.” Onuk submit.

While pledging more support for the school in area of chairs and tables, he charged community leaders to keep watch on the project in order to serve the purpose for which it was main for.

They informed that, government cannot do it all alone, appreciated the donor for a job well done, and also thanked school management for the corporation in ensuring timely completion of the project. The principal used the occasion to present trophy won by Blue House to the Patron Engr. Godwin Etim.

Students in their own way of appreciation, thrilled guests and other attendees to songs and cultural dance displayed.