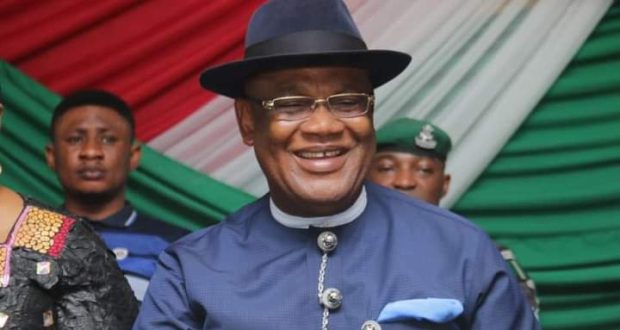 Inyang-eyen Replies, Thanks Gov. Udom for Opportunity to Serve

Following his relief from duty Tuesday, 22nd February, 2022, the immediate past Chief of Staff to the Governor of Akwa Ibom State, Akparawa Ephraim Inyangeyen, has in a prompt and gratuitous letter thanked the governor, Mr. Udom Gabriel Emmanuel, for the opportunity he granted him to serve.

In the letter dated February 22nd, 2022 which came barely an hour following his sack, Inyangeyen who is also a former Commissioner for Works said he was grateful to the governor for having found him worthy to serve in two different offices in his cabinet from 2015, first as Commissioner for Works and until lately his Chief of Staff.

“I wish to sincerely thank His Excellency, Governor Udom Emmanuel, for the opportunity he gave me to serve as Commissioner for Works and most recently as his Chief of Staff. I am grateful to him for having found me worthy to hold the two positions in his administration, and I am pleased I made a positive impact while I served”, the letter stated.

Inyangeyen who also expressed gratitude to those he worked with as well as the generality of Akwa Ibom people for the support they gave him said he will continue to give unwavering support to the Completion Agenda of the governor and always committed to the betterment of Akwa Ibom State.

“Let me restate my loyalty to His Excellency, Governor Udom Emmanuel and my unflinching support for his Completion Agenda. I wish to state emphatically that I’ll continue to work for the betterment of our dear State whenever I find myself in future”, he maintained.

The governor’s letter dated February 22nd, 2022 and signed by Secretary to the State Government, Engr. Emmanuel Ekuwem, entitled “Appreciation of Your Service” had conveyed “the governor’s profound appreciation of the worthy contributions” Inyangeyen has made to the development of the State while he served.

The letter further stated, “However, given the urgent need to match skill set and competences to the task of maintaining the momentum of economic development in peace, your services are no longer required and you are hereby relieved of your position as Chief of Staff (CoS) to His Excellency, the Governor with immediate effect”.

A day to this development, the Government of the State had on Sunday, February 20, 2022 withdrawn, the second time in a matter of weeks, all security details attached to former CoS.

That was just a after the Chief of Staff was alleged to have indicted the governor in his response to a question during his consultations for the Akwa Ibom South (Eket Senatorial District) seat in the National Assembly, video of which was online.

On that particular consultative visit to traditional rulers in Oniong Clan, ONNA local government area, he was challenged by the elders to clear the air on allegations that he diverted monies meant for the construction of the Ndon-Eyo Road while in charge as Commissioner for Works.

“Every contractor in Akwa Ibom is paid by the Accountant-General directly to the account of the contractor. No Commissioner for Works has access to that money. Roads have been abandoned and falsehood spread that Ephraim Inyangeyen ate the money and that is a lie. I’m demanding the elders to petition me to EFCC, if I am found wanting, they should do to me what they want because 1 kobo of that money is not with me. That money is with the contractor and the contractor must account for it”.

Investigations have revealed that Inyangeyen’s openness must have unsettled official quarters, the programmed reaction to which a section of youths on the instruction of the Senior Special Assistant to the Governor on Youth Matters, Mr. Aniefiok Iwaudofia, assembled and made a video threatening to invade the personal residence of Akparawa Inyangeyen with six million youths if he does not retract his statement, which they considered berating to the office of the governor, and also apologize.

In a conscious attempt to temper the mood of the moment and clear the air of misunderstanding surrounding the purported video, elders of Oniong Clan Council and Oniong West Clan Council to whom Inyangeyen had addressed that day in the said video, displayed displeasure over how those they called “mischief makers” had twisted Inyangeyen’s self-exonerating utterances out of context.

In a communiqué issued at the end of a press conference on Monday, February 20, 2022, signed by 12 chiefs of the community, the traditional rulers called for caution as they saw nothing insulting or indicting in Inyangeyen’s response to a question thrown at him by them.

“Akparawa Ephraim Inyangeyen never insulted, Chief of Staff to the Governor, never insulted His Excellency the Governor of Akwa Ibom State or made any insinuation against the Governor…. He never invited the EFCC to investigate the governor. The governor was never part of the discourse”, the statement stressed.

In the same vein, a group under the umbrella of Likeminds Youth of Eket Senatorial District also condemned in totality the distortion of Inyangeyen’s speech by Iwaudofia’s conspiracy theorists. In a press release on Monday, 20th February, 2022 they warned him to be wary of his self-serving inflammatory utterances that were targeted at causing bad blood and needless tension between the governor and Inyangeyen and Eket Senatorial District respectively.

Many sources who have reacted to the sack of Inyangeyen said it was too long in coming considering the obvious frosty atmosphere that had prevailed from the first day the governor realized that Inyangeyen was supporting the ambition of the Senator representing Uyo Senatorial District in the National Assembly, Senator Bassey Albert Akpan (OBA).

A reliable source in government quarters who pleaded strict anonymity was of the view that, contrary “to the weak and illogical reasons” tendered by government, “the sack of Inyangeyen is a smokescreen in revenge of his open and unwavering support for OBA as well as his daring indifference to the governor’s anointed aspirant, Pastor Umo Eno”.

The source however described Akparawa Inyangeyen as “an audacious character, team-player and probably the backbone in times of crisis and strongest pillar upon whom the governor could not have done without in days gone by”.

Akparawa Ephraim Inyangeyen was first appointed as Commissioner for Works by Governor Udom Emmanuel as on July 6, 2015. He was reappointed to the same office in the second term; before being appointed as the pioneer Chief of Staff to the Governor on June 19, 2020.

Those who have interacted with Inyangeyen following latest developments said he was typically hearty, unruffled and as busy as he always has been.

Observers are however of the opinion that there are more dramas to be staged in the Hilltop Mansion as the antics and battle for 2023 intensify.

Previous: A WORTHY HONOR TO A UNIQUE KING!
Next: GOVERNOR’S AIDE TASKS TEACHERS ON COMMITMENT AND DEDICATION TO DUTY