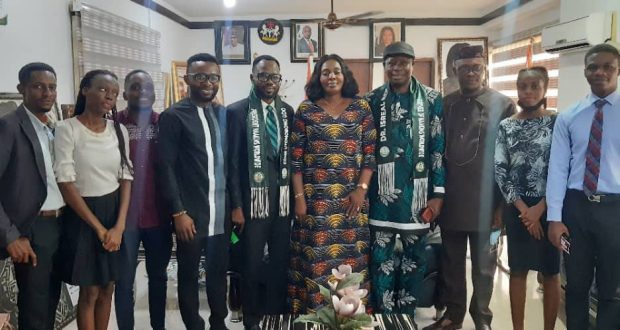 As part of activities marking the 20th Anniversary Celebration and Health Academic Summit of the National Association of Akwa Ibom Medical Students (NAAKIMS), the Honourable Commissioner for Agriculture who is also the Dean, College of Commissioners and Special Advisers, Dr. Glory Edet has been conferred with an award of excellence tagged “Personality Award of the Year”, by Akwa Ibom Student Doctors.

The award which according to the President of NAAKIMS, Comrade Utomobong is in recognition of her support to the association, was presented to her, Tuesday, at the Ministry of Agriculture, Idongesit Nkanga Secretariat, Uyo.

Receiving the award, Dr. Edet appreciated the organisers for finding her worthy to be a recipient of the prestigious award and noted that such recognition would spur her on to do more.

“I want to thank the President of this Association for his commitment to the welfare and progress of the Association and for the numerous achievements he has made since his assumption of office”, she said.

The Agriculture boss charged the students to focus more on their studies so as to become useful to the society when they are done with their academics.

Earlier in his remarks, the Worldwide President of NAAKIMS, Comrade Utomobong Udo noted that the choice of Dr Glory Edet as an awardee, was in line with the ideology of the Association to honour those who support the growth and progress of the Association in the year under review.

“I want to appreciate Dr. Glory Edet for sponsoring the 2021 World Cancer Day, World Malaria Day, scholarships to our members and the sponsorship of medical students, donation of clinical stethoscope and other medical equipment to our members”, he added.

Also Speaking, the Pioneer President and founder of the Association who is also a Consultant/General Surgeon and Surgical Oncology, UUTH, Dr. Isreal Ben, while describing Dr. Glory Edet as a pillar to Akwa Ibom medical students, also appreciated her for touching lives positively and encouraged her to do even more.

Also in attendance were the Special Assistant to the Governor on Project Monitoring, Comrade Ekomobong Iseh, selected Medical Students and other dignitaries who witnessed the presentation ceremony.