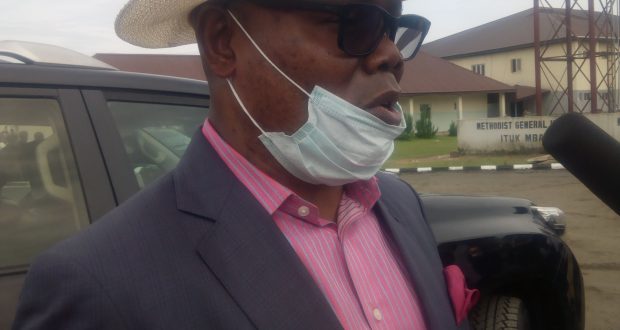 In line with his quest and passion to transformed Akwa Ibom from a civil service economy to a thriving private sector economy, the Honourable Commissioner for Economic Development and Ibom Deep Seaport, Mr Akan Okon has commended his boss Governor Udom Emmanuel, on his developmental strides within five years in office most especially his proactive approach towards managing and combating the novel global pandemic, Covid -19 which has ravaged the world economy to a stand still.

Mr. Okon handed this down on Friday May 29,2020 during the official commissioning of the 300 bed capacity Isolation Center For Quarantine And Prevention of Infectious Disease at Methodist General Hospital, Ituk Mbang, Uruan Local Government Area build by the Governor as part of the measures taken to curtailed the pandemic in the state.

The Itu born economist expert, revealed that the 300 bed space isolation center is one of the best in the country going by the guidelines and recommendations put forward by the Nigerian centre for disease. control (NCDC).

He said that the facility, with the state of the art equipments will be man by trained and experienced medical professionals in the state.

He further explained that His Excellency Governor Udom Emmanuel is very passionate and much interested in the lives, wellbeing and welfare of his citizens which is a testament of the kind of leader Akwa Ibom people were praying for most importantly in working round the clock to erect the building in a period of six weeks.

“This is a great day for Akwa Ibom State. Governor Udom Emmanuel has shown exceptional leadership in the way he manage the state, i must say that the
Governor is much interested in the standard and wellbeing of the people. The facilities here is of the highest quality, apart from this pandemic, when it’s over, it will be used for other medical activities”. He said.

Acknowledging the unprecedented strides recorded by the present administration in agriculture, education, infrastructure, aviation, human capacity development, industrialization, amongst others, Mr. Okon noted that Governor Udom Emmanuel has tremendously impacted positively in every sector of the state economy which has carved a niche for himself.

While commending Mr. Udom Emmanuel’s five years on the saddle, the Economic boss disclosed that his step by step approach for the actualization of the Ibom
Deep Seaport and Ibom Industrial City project will solidify the State’s industrialization drive which he is more committed and passionate about the job.

He used the occasion to called on all Akwa ibombite across the globe irrespective of party differences to join hands with the Governor in building a new Akwa Ibom State.