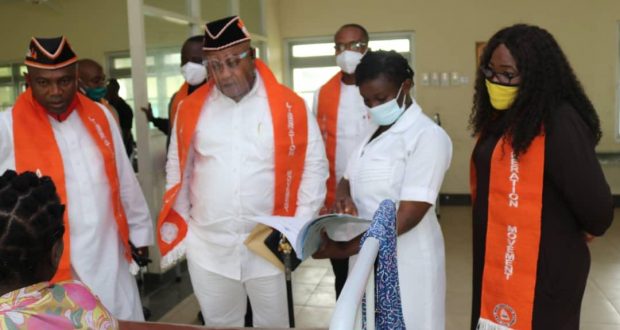 Presenting the cash donation to the benefiting patients at General Hospital, Iquita, Oron and Saint Luke’s Hospital, Anua, Uyo, National leader of Akwa Ibom Liberation Movement, Akparawa (Prince) Emmanuel Sam said the group chose to celebrate the governor’s birthday with people in need in hospitals across the three senatorial districts of the state.

Akparawa Sam, who is the Special Assistant on Local Media to Governor Udom Emmanuel, said members of the movement were pleased to use the governor’s birthday to reach out to some Akwa Ibom people.

“As a group, we have visited three hospitals, one in each of the three senatorial districts, and have paid the bills of some patients. This is our own birthday gift to the governor”, he said.

Akparawa Sam added that Akwa Ibom Liberation Movement which exists to mobilise people and build a community-based leadership network through them, to promote and entrench good governance, raise strong awareness on political justice and strengthen citizens’ participation in governance.

Presenting the group’s donation to patients at General hospital, the Deputy National leader of Akwa Ibom Liberation Movement, Prince Mendy Archibong, encouraged the patients to be hopeful of a quick recovery.

Archibong, who is the Managing Director of Goodtime Group of Companies told the patients that Governor Udom Emmanuel loves them that is why he has always encouraged everyone who wishes to celebrate him on his birthday to channel such funds to people in hospitals and others in need.

Beneficiaries of the reach out and management of the hospitals visited lauded the group and wished the governor a happy birthday.

Mothers of the multiple birth children, Mrs Ekemini Effiong, and Mrs Uduak Joseph Asuquo, who received N20,000 each thanked Akwa Ibom Liberation Movement for her charity towards them and their children.

In separate remarks, management of three hospitals visited during the outreach lauded members of AILM for the gesture.