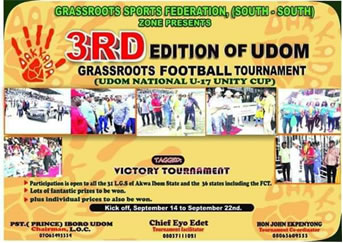 Preparation’s are on the top gear for the third edition of Governor Udom Emmanuel grassroots football tournament, also known as Udom National under 17 cup. The competition which is set to kick off September 14 to September 22 will have over 50 clubs across Nigeria participating for this year edition. Briefing newsmen recently in uyo on the generality of the game, Pastor Iboro Udom, Chairman local organising committee explained that the competition is open to all as it’s aim at inculcating the spirit of sports as well as self development in young ones. Adding that the competition have no political affiliation.

Prince Udom further explained that the winners will smile home with 2 million naira, while second position will receive 1.5million and their third runners will get 1 million naira with other consolidation prices to be won.

” gentlemen, registration for this competition is still ongoing with only 50 thousand naira one can register his club, let me also informed you that accommodation and jersey will be free especially for clubs outside the state, i want Akwa Ibom people to take active part in the competition in other to support governor Udom Emmanuel in sport development”.

Speaking on the security challenges and crowd control, the chairman hinted that arrangement have been concluded with some of the security agency to position their men on the four centers where the match will be played, which include, West Itam secondary school sport ground, University of uyo town campus stadium, four town secondary school and Uyo High school. On area of age, Prince Udom also explained that it will be based on facial recognition as no room will be given to over age people to participate, maintain that the committee is working assiduously with all

concernd bodies in recording success come September 14, use the opportunity to call for sponsorship from various organisation, individuals as well as lover of sport to contribute to the success of the competition.

The committee through their leader, pour encomium on governor udom Emmanuel on his developmental stride in repositioning the sport sector,  having seen the enormous and tremendous performance of our darling team,  Akwa United football club and Akwa  Starlests in the Nigeria professional league, adding that his administration have boast the team to always give the best in their career, especially when they where crowned the champions of AITEO cup in 2015. Also appreciate the effort of commissioner for youth and sport, Sir  Monday Ebong Uko for being a good ally to the governor  in areas of sport development ,wishing the commissioner a smashing second team in office.

Also speaking one of the facilitators,  Chief Eyo Edet express his happiness with Sports Writers Association Of Nigeria (SWAN)  akwa ibom state chapter for their professionalism and dexterity in sport reporting while appealing for more robust relationship in keeping the flag flying ,adding that the match will be watch by a glittering array of eminent personalities.

Reacting the State secretary of SWAN  comrade Emmanuel Akpan restate the union commitment in rendering excellent service in areas of sport coverage across the length and breadth of the state.