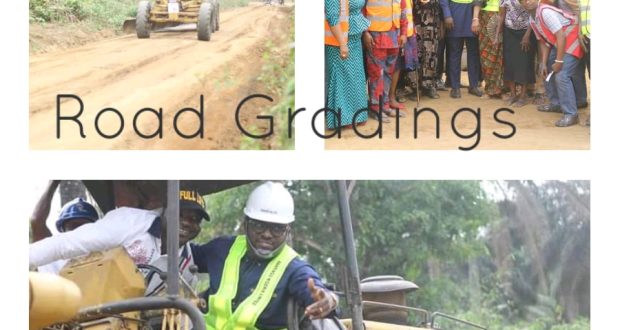 It is one year, since the Executive Chairman of Ikono local government area, Hon. Nyakno Uwemedimo Okoibu took the oath of office, to serve humanity, protect lives and properties, promote good governance, galvanize democratic dividends and propagate the ideals of selfless political will to the glory of God and the good people of Ikono Local Government Area, in Akwa Ibom State.

In 365 days at the helms of the council, he has already become a study in bold letters to many within and outside the circle of politics and governance, through his incisive decisions, proactive approach, inclusive, efficacious, transformational and people-oriented style of leadership.

As a dynamic administrator and a workaholic, it is on record that Hon. Nyakno Okoibu did not step into politics as a bench warmer but a new breed with a verve and vigour to deliver the Greater Ikono Blueprint within the ambit of his dispensation.

Distinguished by the solid achievements of his administration in the areas of human capacity development, health, power, commerce, industrialization, ICT and security, Okoibu’s breeze of impact has blown across Ikono and the nostalgic effect of his purpose driven leadership has already made him the “Poster Boy” of Governor Udom Emmanuel’s political Masterclass.

In pursuit of a vigorous policy of human empowerment, economic advancement, social welfare and capacity building, Okoibu’s milestone has been expressed in enormous developmental projects to mention but a few.

Hon. Nyakno Okoibu subsidized medical cost for indigenes at the Ikono General Hospital, reconnected the hospital to the national grid and reactivated the borehole at Nung Ukim and Ibiaku primary health centres. He also facilitated a free medical program in the three zones of Ikono local government area within this first year in office.

INFRASTRUCTURE
No stone has been left unturned in his infrastructural renaissance. Hon. Nyakno led administration renovated the effigy of the first Chairman of the experimental local government administration in British West Africa, renovated the office of the Executive chairman and vice chairman, furnished the offices of the executives, legislatures and civil servants with the provisions of executive office tables and chairs, reactivated the borehole facilities at the council secretariat and high court complexes and graded in routes like: Ukpom Usung Ubom road, Ikot Akpan Ikono Ibom road, Ndiya usung Ikot Idaha road, Usuk Ediene road, Ikot Ediene road, Aka Ekpeme road, and Okop Akama road at Ukpom( an exercise which will continue as the dry season approaches to cover other areas). He also electrified the offices of supervisors and special advisers at the local government secretariat and renovated the immigration office at the council secretariat(ongoing).

EDUCATION
Hon. Okoibu led administration facilitated the scholarship of 12 indigenes drawn from the 12 wards of Ikono to study at Ordinary National Diploma (OND) level in Nation Builders University – an affiliate of Obong University, Obong Ntak, Akwa Ibom State. This number is expected to increase and to cover other higher institutions in Akwa Ibom State.

SOCIAL WELFARE
Hon. Nyakno led administration reduced marriage fees by over fifty percent (50%) in Ikono Marriage registry and the cost of housing by over forty percent (40%) at the low cost housing estate in Ibiaku Ntok Okpo.

ICT DEVELOPMENT
Under his watch and by his approval, the first ever website in Ikono local government administration was created to ensure transparency, accountability and accessibility in governance. He also digitalized the council secretariat for efficient data processing, file and information management by the provisions of computers, printers, photocopiers, scanners and wifi devices.

SECURITY
Hon. Nyakno Okoibu has held lots of security summits with stakeholders and security personnel and had introduced a functional community watch programme. He further boosted the moral of the security forces and provided a security vehicle to the National Police Force.

As we reflect, reminisce and revere Nyakno Okoibu’s breathtaking performance, which led to his emergence as one of the best performing local government chairman in Nigeria in the just concluded local government administration awards (LOGMA 2021), it is worthy of note that while the applauds rise and ovations linger, at the core of his service, the policy of continuity and the pledge to stay faithful and committed to the mantra of sustainable development for the citizens of Ikono remains the cardinal focus of his administration.

Thanks to the Governor of Akwa Ibom State, His Excellency, Deacon Udom Gabriel Emmanuel, whose wings Hon. Nyakno Okoibu led administration in Ikono soared and on that same God who saw us through the last one year, will our hope for a better Ikono be anchored as Nyakno Okoibu proceeds in the business of a more positive and aggressive transformation of the cradle of Ibibio Nation.