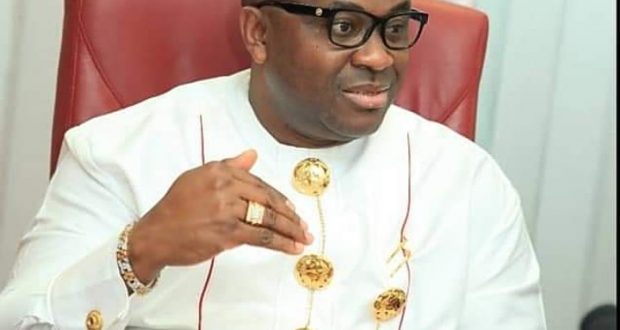 Thirty three years after Akwa Ibom State was carved out from the then Cross River State on September 23, 1987, it is on record that, three illustrious sons of the state from Uyo Senatorial District have been given opportunities to pilot the affairs of the state as governors starting up to the current democratic dispensation..

For emphasis, these leaders are all from Akwa Ibom North East (Uyo) Senatorial District. An indigene of Nsit Ibom Local Government Area, Air Commodore Nkanga (rtd) was Military Governor of Akwa Ibom State from September 1990 to January 1992 during the military regime of General Ibrahim Babangida.

Some outstanding performances of Air Commodore Nkanga (rtd) while in office as a military governor of the state such as, Idongesit Nkanga State Secretariat, Ibom Hall, and Nsikak Eduok, IBB Roads among others, left no one in doubt that Otuekong Idongesit Nkanga acquitted himself creditably as an administrator, who gave a good account of himself while in service to his mother land.

Furthermore, at the beginning of the third republic in Nigeria, Obong Akpan Isemin, of blessed memory, who was known for his unique and sterling leadership qualities an indigene of Etinan Local Government Area from Etinan Federal Constituency, got the mantle of leadership after being duly elected as the Executive Governor of the State from January 1992 to November 1993.

Though that fantastic tenure was short-lived following the take over of Government by the then head of state, General Sani Abacha. Such abrupt end was not without the late Obong Isemin giving his best for the overall development of the state, when he left office in November 1993.

The former governor of the State passed on as a hero leaving behind many socio -economic, human and infrastructural milestones to his credit.

Since democracy was what all Nigerians were yearning for after Nigeria’s Independence in 1960, the advent of democracy on May 29, 1999 was indeed something that heightened the hopes, expectations and the yearnings for a better life for all Nigerians and Akwa Ibom in particular.

However, indigenes of the State at home and in the diaspora could not bargain for anything less rather than having a competent and capable individual whom they believe would be able to consolidate on the solid foundation for a State created out of necessity to address the challenges of injustice, inequality and underdevelopment.

Consequently, the choice and subsequent election of the second civilian governor of the state in the person of Architect (Obong) Victor Attah, enjoyed the massive support and endorsement of over 80 to 90 percent of Akwa Ibom people.

Architect (Obong) Attah a true son of Ibesikpo Asutan Local Government Area in Uyo Federal Constituency, assumed the exalted office of the Governor having been duly elected shortly after the advent of current democracy on May 29, 1999.

It is on record that Obong Attah had ruled the state for two terms of eight years from 1999 – 2007, Late Obong Akpan Isemin, also governed the state between 1992 to 1993 while Air Commodore Idongesit Nkanga ruled the state from 1990 to 1992.

There are therefore no available records indicating that Itu/Ibiono have ever produce even a deputy governor of Akwa Ibom since the state creation in 1987 till date, hence the ongoing advocacy supporting Itu/Ibiono Ibom for 2023 governorship in Uyo Senatorial district for justice, equity and fair play.

They reasoned that the likes of Senator Bassey Albert Akpan (OBA), Mr Akan Okon and Senator Ita Enang et el, are few tested, trusted and home grown governorship potentials, from Itu/Ibiono Ibom Federal constituency that the good people of Uyo Senatorial District should unanimously adopt for the plum job of occupying the State Hilltop Mansion on their behalf come 2023.