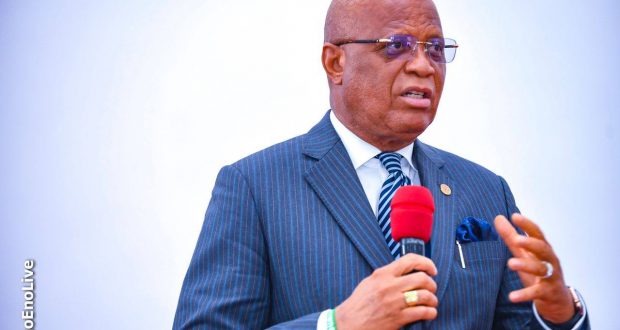 Besides being the preferred and anointed successor of Gov. Udom Emmanuel from 2023, Pastor Umo Bassey Eno is a multi-dimensional personality with numerous shades of life.

His known odysseys cannot be dissected entirely from just one angle. So, l will approach just one facet of Pastor Umo Eno’s life —- Enterpreneurship, since material prosperity is the grand desire of our people.

Pastor Eno’s antecedents,background and track record in enterpreneurship should naturally and without doubt kindle in every Akwa Ibom person, the desire to support his gubernatorial ambition. It should because politics, nay elections comes and go but survival and home economics remains.

Man’s survival and success in life, on a broader perspective, is dependent on one’s ability to organize his economic and commercial life devoid basically of any external influences and interference.

For instance, if there were no civil service employments, no companies where people are employed to earn salaries and no Central Government where fiscal monthly allocation are sent to State Governments and governors for development, only those with the inherent ability to creat from scratch, economic ventures, which guarantees profit will stay afloat and survive.

Imagine the world in the afore painted scenario, self dependence economically will soar. Rational and constructive economic thinking in individual citizens will be engendered and commercial ideas and dynamism in our people will be heightened.

The churning of money and wealth-making ideas within one’s mind for the ultimate creation of personal wealth would be as much numerically as there are people geographically alive today on a global scale — For every man living will hatch out ideas intended and expected to make for his or her survival without which, one would be doomed to hunger, thirst, lack, failure and death, thereby nullifying the purpose for which he was created and essence of his life.

As an individual, your basic ability to organize your life either in trading or other economic ventures in furtherance of wealth creation devoid of what you get from your place of employment by way of emolument serves as the yardstick by which your acumen could be judged.

A foray into ancient history, be it secular or biblical reveals that those who held sway materially in the society were those who had capacity to put one thing upon another through constant supervision, evaluation, organisation and control, which eventually blossomed into wealth for them and placed them in leadership position in their communities, hamlets and climes and until one had such ability, he or she was a nobody even in the stone age.

Here then is where Pastor Umo Bassey Eno, the Standard bearer of the Peoples Democratic Party stands taller than his peers and contemporaries who are equally in the guber race from other political parties.

Pastor Eno is coming into the Akwa Ibom gubernatorial race with a truck load of wealth-creating ability, job -creating ability , unquestionable capacity in supervision, prying ability in evaluation, established ability in task organization and a visible interest in coordination. These, as you know, has been every successful business man’s greatest tools for success.

Little wonder why His Excellency (Gov) Udom Emmanuel in collaboration with Elders in our State have endorsed Pastor Umo Eno to succeed the reigns of power in our State from 2023.

Back to the core of this discourse, every Akwa Ibom person desires to be wealthy and materially self sufficient.
Though massive employment into the State Civil Service and other concerns owned by the State will be guaranteed when Pastor Umo Eno assumes the saddle, the truth is, nobody becomes wealthy by merely being an employee.So pastor Eno is coming to inspire and engender massive enterpreneurship and enterprise.

A more conducive environment for enterprise and business will be created for those who desires to be in business while those willing to be employed into the State Civil Service will have their way.

Pastor Umo Eno is in the know, from years of experience, of the fundamental incentives starters in business would require to kickstart their ventures and has already evolved a comprehensive blueprint intended to turn Akwa Ibom and her citizens to leading industrialists not just in Nigeria but in the African continent.

The enviable entrepreneurial niche Pastor Umo Eno has carved for himself from no where, basically is a good enough testimonial to assume the Akwa Ibom governorship.