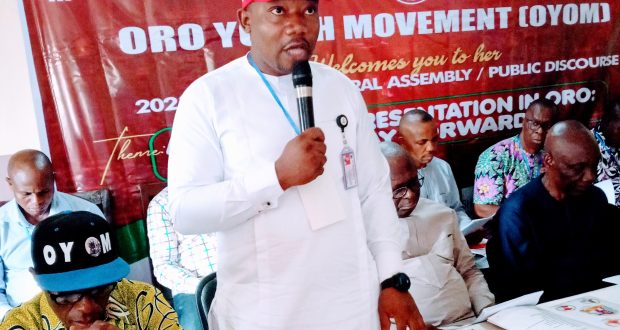 Ahead of the 2023 governorship election in Akwa Ibom State, a foremost civil rights organization founded in 1998 to articulate and defend the fundamental and democratic rights of Oro people, Oro Youth Movement (OYOM), has declared that the office of the governor be zone to Oro Nation for fairness, justice and equity.

The group, made up of Youth from Oron, Mbo, Urueoffong Oruko, Okobo and Udung Uko local government areas of Akwa Ibom State, disclosed their stance in a communiqué dated December 28, 2021 and signed by the National President of the group, Comr. Edet Eyo and Comr. Sunday Offiong
National Secretary/Chairman Communique Drafting Committee at the end of their Annual General Assembly/Public Discourse held in Oron.

They group noted that the zoning arrangement has been jeopardize over the years by some self centered politicians,who feel and think Oron People are not qualified to govern Akwa Ibom state hence the continuous political tension, bitterness and rancour among political actors in the state.

OYOM in that communique further passed a vote of no confidence on the Administration of Commodore Duja Efedua in the last four (4) years and describe it as anti-people and retrogressive. “It should be noted that Commodore Efedua during the period under review have shown high level of handedness, maladministration and massive misappropriation of public funds. For instance Efedua has unilaterally without recourse to Civil Service Rule sacked over 35 Staff of the Academy mostly from the Host Community and replaced them with over 42 part-time staff recruited from his State of Origin Delta State. This is a clear violation of Local Content Law and the Federal character principles.” They appealed to President Buhari to immediately remove Efedua from office and give his assent to the proposed bill seeking to upgrade the academy to University of Maritime Studies Oron.

The group lamented the failure and slow pace of work at the dual carriage way from the Airport Junction through Nsit Atai to Oron, six years now since the commencement of work, describing it as unfortunately circuitous and unimpressive with no justification.

The Assembly which was chaired by an eminent son of Oro, a retired Public Servant and a Community Leader Elder Ante O. Ante and attended by prominent personalities from within and outside the State unanimously call on Governor Udom Emmanuel to revert to the original location of the Ibaka Deep Seaport seaport at Ibaka as any attempt to do otherwise shall be vehemently resisted by Oro Youths.

Presenting a keynote address on the Theme; Abysmal Representation in Oron Nation: The Way Forward. Dr. Effiong Owowo, bemoaned poor representation by those entrusted with the business of governance from Oron extraction, describing them as greedy politicians who lack the intellectual base to speak for Oro people.

“Abysmal Representation in all fronts mean bad representation, our representatives have failed us, they lack the panache of what good governance mean. Oro should be given their pride of place in the scheme of things come 2023, we have been sidelines for too long.” Owowo intone.

Earlier in his welcome address, National President of the group, Comr. Edet Eyo said the twenty-three years old civil rights organisation, has always been at the forefront in agitating meaningfully for the general survival of the Oro people, thanked all and sundry, particularly the youths for their support and solidarity to OYOM and assure them of the group’s total commitment to the struggle for the emancipation of Oro people.

The event also feature presentation of Awards,to selected patron of the association and launching of skill acquisition training for youths.