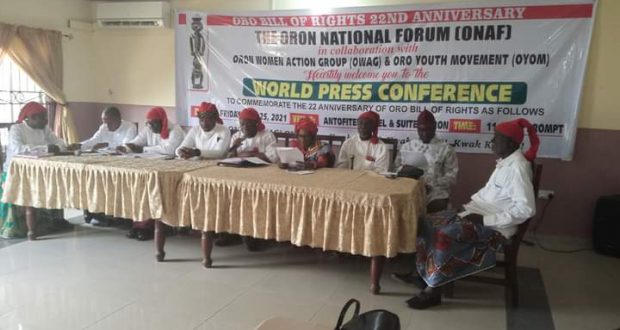 Worried by age long marginalization, gross intentional neglect and adamant refusal of the federal and state government in giving them fair hearing in the scheme of things, despite its abundant natural resources in oil, gas and sea foods. President, Oron National Forum (ONAF), Comr Ita Ante has said that Oro ethic Nationality need not to beg other ethic groups in Akwa Ibom for support to actualise its 2023 governorship ambition.

Comr. Ante, who spoke to journalists, Friday, June 25th during a Press Conference Organized by ONAF in collaboration with Oron Women Action (OWAG), and Oro Youth Movement (OYOM), to Commemorate the 22nd Anniversary of Oro Bill of Rights, pointed out that in the spirit of equity, justice,and fairness,other groups that have produced Governors, should not overheat the polity by their purported unwelcome shot at the 2023 governorship seat.

In a Press statement titled “Why we Oron cannot wait” Ante, stressed that, an Oron man is prepared to take over Akwa Ibom leadership, otherwise the unraveling seeming disunity will worsen.

According to him, the Ibibio and Annag has taken their turn, through former Governor Obong Victor Atta and Chief Godswill Akpabio, that come 2023 Oron should be given the chance to also produce a Governor.

He said ” Oro people has rejected political arrangement on senatorial district since 2007. we now want it on ethic group, our democratic struggle will be actualize in 2023, we are calling for our own identity.”

On his part, Comr. Edet Eyo, president, Oro Youth Movement OYOM, said the struggle for Oro liberation can never be trucated, as the enclave is gasping for breath and crying for justice and equity in the Nigerian federation.

Comr. Eyo disclosed that the youth under his watch has embarked on advocacy visits and outreach missions to drum support for the emergence of Akwa Ibom governor from Oron stock, noted that they have all what it takes to also have a shot as the number one Akwa Ibom son come 2023.

He expressed disappointment with some of the Oro representatives, who he said have betrayed the collective interest of their people to their own personal aggrandizement.

While condemning the lopsided and total exclusion of Oro indigene into Boards, Ministries and agencies. The OYOM president, said “Oron will take power by force through constitutional means come 2023, if we are not given fair hearing, we have been patient enough, anything outside that will be strongly resisted or Akwa Ibom will not be the same again.” Eyo threatened.