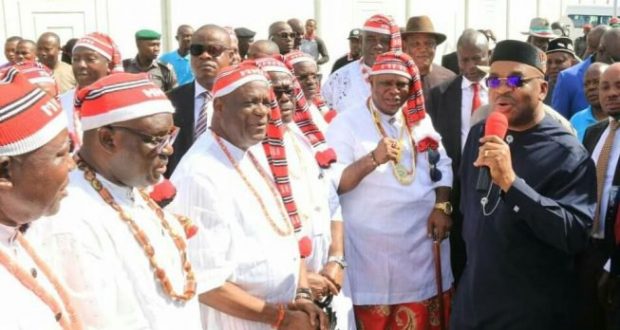 2023 Guber: Udom Distance Self From Producing A Successor.

Governor Udom Emmanuel of Akwa Ibom state, have explained that he will not seek third term using a surrogate as a successor.
The governor cleared the air while interacting with the leadership and some members of Mboho Mkparawa Ibibio, foremost socio cultural organisation of the Ibibio youth, that stormed government house gate to herald his arrival following his victory at the governorship petitions tribunal.
“I usually hear people saying he has anointed someone who will take over from him so that he can be able to manipulate the person to do his bidding after leaving office, I want to assure you that it is not true,” he said.
“As I speak, it is only God who knows who my successor will be. When He presents him, we will support him to also succeed. I commend Mboho for the role it has played in maintaining peace in our dear state. The peace of Akwa Ibom State will never be shaken.”
Emmanuel whose arrival from Abuja was greeted by different crowds of supporters right from the airport through to the city center, thanked all Akwa Ibomites and the association for their surprise welcome and support to his administration.
He appreciated the Mboho for uniting in support to him, despite all odds, during the election, and urged them to continue supporting his administration to achieve the completion agenda.
Emmanuel dedicated the victory to God and Akwa Ibom people for the show love demonstrated at the polls and affirmed by the judiciary.
He said his administration is committed to deliver on the campaign promise of an economic and socially viable state bonded in love and unity.
The state chief executive said he is passionate about youth employment, industrialisation, education and infrastructure across the length and breadth of the state.
He thanked the people for the show of love and the judiciary for being the last hope of the common man by upholding the truth.
Earlier, Patrick Udofia, president of Mboho Mkparawa Ibibio, said the association came to register their goodwill to the state chief executive on his second term confirmation by the governorship election petition tribunal