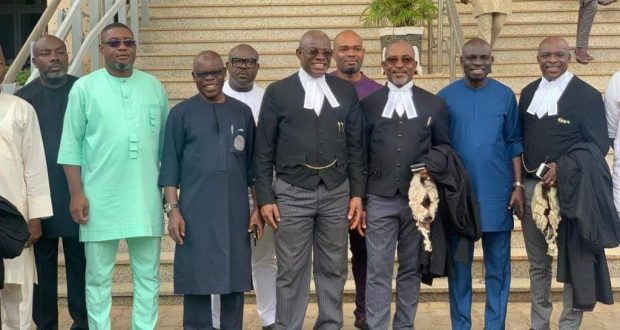 Justice Obiora Egwuata of the Federal High Court, Abuja on Friday dismissed as incompetent and lacking in merit, a suit challenging the validity of the April 30, 2022 PDP Ward Congress in Akwa Ibom State.

Delivering judgement in Suit No.FHC/ABJ/CS/606/2022 between FRIDAY IWOK & ORS V INEC & ORS, Justice Egwuata ruled that the Court has no jurisdiction to try the suit because the Plaintiffs had no locus standi, submitting that the suit borders on the internal affairs of the PDP and that the case discloses no reasonable cause of action.

The Court also held that the plaintiffs did not prove that the PDP disenfranchised any of its members and failed to show any evidence of people shortlisted for the ward congress, thus unable to prove how their rights were breached.

On the Plaintiffs application for the nullification of the PDP primaries, the court held that it has no power to stop or restrain the conduct of any primary elections and upheld the validity of the April 30, 2022 Akwa Ibom PDP Ad-hoc delegates congress thereby giving judicial backing to all primaries held by the party as being valid and in line with constitutional requirement and the Electoral Act 2022 as amended.

Despite the plaintiffs lacking the locus standi, the court went ahead to consider the case on the merit and dismissed same in its entirety as incompetent.

Reacting to the judgement, Counsel to the 2nd defendant, Barr Emmanuel Enoidem said, the judgement will serve as a benchmark for litigants who will want to go to court on any of the contentious issues of the 2022 Electoral Act as amended.

“The Electoral Act 2022 is a new legal instrument and many courts of law had the opportunity to consider the provisions especially the novel ones but this is the first time a court has sat to give a comprehensive decision both in ruling and judgment concerning some salient provisions of the Electoral Act”.

“The judgement will serve as a benchmark for a lot of litigants who will want to go to court on issues concerning the 2022 Electoral Act particularly, Section 84 (3) that a lot of people are brandishing out of context. This court has taken time to situate it within the parameter that section was intended to serve”, he declared.