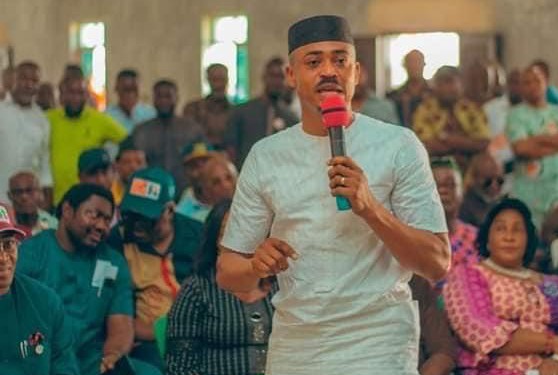 The Association of Local Government of Nigeria (ALGON), Akwa Ibom State chapter, on Tuesday, February 8, 2022, threw its weight behind the governorship aspiration of the Honourable Commissioner for Lands and Water Resources, Pastor Umo Eno as the build-up to the 2023 general elections gathers momentum.

The State ALGON Chairman, Mr. Iniobong Robson, who is also the Chairman of Esit Eket Local Government made the declaration during a consultative visit by the Umo Eno Campaign Organisation to the Peoples Democratic Party at the Party’s Secretariat, Atan Offot Uyo.

Mr. Robson explained that the 31 local government chairmen decided to declare their total support to Pastor Umo Eno to enable him to consolidate on the gains recorded by the Governor Udom Emmanuel-led administration in Akwa Ibom State.

Addressing the party leadership, the guber hopeful, Pastor Umo Eno thanked the party for opening its doors to him and his entourage for the consultation and pledged to continue on the path of excellence in governance that the party has been known for.

On his part, the PDP State Chairman, Rt. Hon. (Elder) Aniekan Akpan appreciated the team for the visit and promised a level playing field for all the gubernatorial aspirants.

Others who spoke at the event included the DG of campaign, Chief Assam Assam, SAN, the International Coordinator of Maintain Peace Movement (MPM), Barr. Emmanuel Enoidem, the Chief Whip of Akwa Ibom State House of Assembly, Rt. Hon. Emmanuel Ekpenyong, the Dean of Commissioners and Commissioner for Agriculture, Dr. Glory Edet, as well as the Senior Special Assistant to the Governor on Youth Matters, Comrade Aniefiok Iwaudofia.

Present at the consultation were members of the State Executive Council, House of Assembly members, stakeholders of the party, Local Government Chairmen, and friends of Pastor Umo Eno.