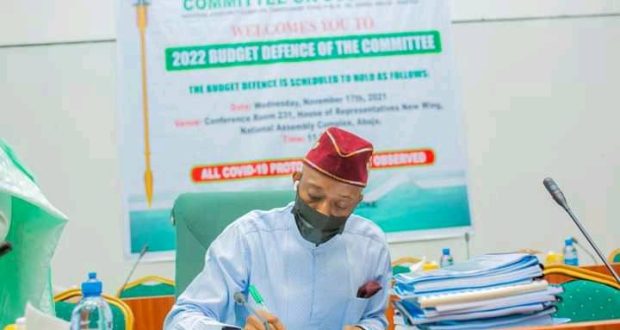 …. reiterates the establishment of Court of Appeal

The Chairman, House Committee on Judiciary, Mr Onofiok Luke has restated the commitment of the 9th House of Representatives to reforms in the nation’s judiciary during the 2022 budget defence held at the National Assembly complex today.

Luke, in his opening address, said that the Committee is taking some legislative actions that will foster the development and independence of the judiciary. He added that House is considering reviewing the salaries and wages of judicial officers for better performance. He called for the cooperation of stakeholders involved in this regard.

The lawmaker also appealed for justice to be brought closer to the people through establishment of courts. According to him; ‘There is need to establish courts in places that have none so as to bring justice closer to the people’. He insisted that Akwa Ibom State deserves Court of Appeal, Uyo Judicial Division, given the volume of cases that emanate from the court.

‘The Judiciary functions as a refuge for all and sundry. It is incumbent on all of us to work to protect its independence and sanctity. The fact that one is in power today should not make the person forget that he or she will need the Judiciary for protection especially when out of power. Everyone has a day in court’, Luke said.

The Executive Secretary National Judicial Council (NJC), Ahmed Gambo Saleh, thanked the Committee for its continued support to the Judiciary. He stated that the judiciary has accessed over 80% of the funds allocated to it. He however stated that the exchange rate has impacted on the performance of Judiciary.

The committee was appreciated for the cooperation with the judiciary and how constant advocacy for better welfare for judicial officers and increase in statutory transfer to NJC.