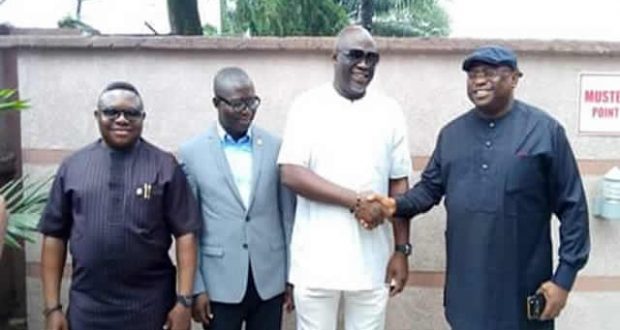 The Speaker of the Akwa Ibom State House of Assembly, Rt. Hon. Aniekan Bassey, has made a strong case for Nigerians to embrace entrepreneurship and learn the ideals of financial independence.

Rt. Hon. Bassey disclosed this on Friday when he played host to the leadership of the College of Former Aides to Governor Udom Emmanuel (COFA), 2015 – 2019 in Uyo.

The Speaker maintained that it was time for government to encourage entrepreneurship by ensuring that local businesses grow alongside multinationals to deepen development in Akwa Ibom, adding that “9% of the job will be outsourced to local firm. They must also be made to be part of the bidding process.”

He said the 7th Assembly, under his leadership, will be proactive in its primary assignment and further called for domestication of the Local Content Law in the state to allow for multinationals to support Small and Medium Enterprises [SMEs] and the people through local patronage, employment and mentorship.

Rt. Hon. Bassey thanked COFA for conceiving the idea of Mentor-Protégée Law to develop and protect local businesses and promised that the 7th Assembly will create a synergy with the body to support the developmental strides of Governor Udom Emmanuel.

In his response, the President of COFA, Barrister Andem Andem thanked the Speaker for hosting them and for the opportunity given them to make history, saying that “2019-2023 will be golden years for Governor Udom Emmanuel.”

Barrister Andem further said COFA was determined to work and add value to the leadership of Governor Emmanuel by bringing up ideas that will help in the areas of proposing workable Bills for Akwa Ibom people.

The COFA President was accompanied by his Secretary, Mr. Sam Edoho, and Elder Imoh Emeh.

Previous: NBA Uyo Branch elects New ExCo, Aniema Etuk emerges Chairman
Next: Money Is A Coward, It Does Not Go To Where It Does Not Feel Safe- Gov Emmanuel