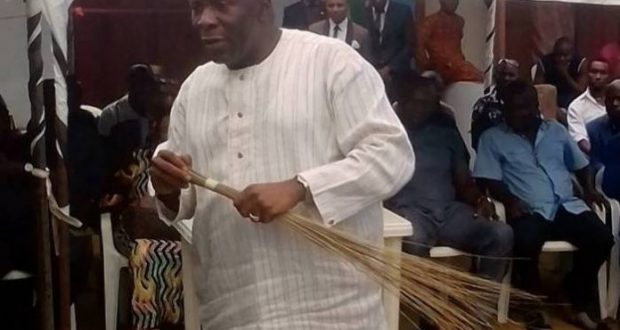 A former Nigerian senator and stalwart of the ruling All Progressives Congress, APC, John Udoedehe, has said that he wouldn’t mind accepting an appointment as a messenger or a cleaner from President Muhammadu Buhari.

The federal government recently released names of board members of various agencies. Mr. Udoedehe, a former senator from Akwa Ibom State, was appointed as a board member for the Nigeria Information Technology Development Agency.

Since then, Mr. Udoedehe, a former minister, said he has been receiving several calls from his political associates and supporters who felt that the appointment was humiliating, considering his reach in politics.

“It will be disrespectful to the president for me to reject the offer, I am a loyal party member,” Mr. Udoedehe said Saturday evening.

“If the president finds me worthy to be a messenger or a cleaner in the government, as a Christian I should humble myself and accept it.

“I don’t want to give my enemies weapon to tell lies against me. I don’t want my enemies to go and tell the president ‘I told you this man is arrogant’.

The former senator who said he has great respect for President Buhari said a lot of people have been calling him since they heard of his appointment.

“They are shocked by the reply I give them,” he said.

Mr. Udoedehe said he will build a structure that can get President Buhari to win a majority of votes in Akwa Ibom in the 2019 election.