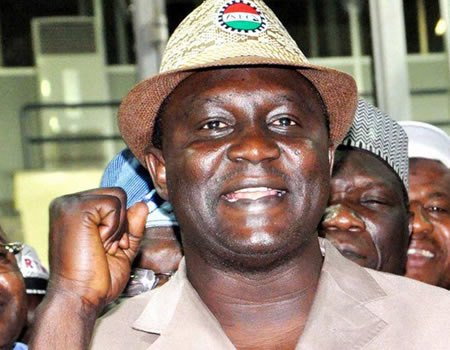 The Nigeria Labour Congress (NLC), on Friday, declared that the pump price of ₦145 per litre of petrol is sacrosanct and there will be no change whatsoever to the Premium Motor Spirit’s price.

Comrade Ayuba Wabba, the NLC president, reacting to a statement credited to the Minister of State for Petroleum, Dr Ibe Kachikwu, signalling a possible increase in fuel pump price. He said the issue of price increase was never on the table and the Minister was probably misunderstood.

While speaking with Saturday Tribune on phone, Wabba said President Muhammadu Buhari, had indicated in a meeting he held with labour leaders and other stakeholders on Tuesday in Abuja, the Federal Capital Territory of Nigeria, that the issue of price increase should not be contemplated.

He said the issue on the ground after the Tuesday meeting was how to make fuel available at the current price and monitor distribution. He said the meeting was never for deliberation to increase the pump price.

Ayuba Wabba said: “It (price increase) was not actually on the table. The only thing on the table, which we are presently discussing, is how to make the product available at the price of ₦145 per litre. Nobody has the mandate to discuss the issue of price. The price at ₦145 is sacrosanct. All we discussed at the meeting is how to make the product available.

“We were there at the meeting where he (Kachikwu) addressed the journalists just now. In fact, the meeting is still going on and we are there. So, that is the reality and that is the fact; any other issue in speculation is not part of the subject matter of the entire discussion.

“The President initially, when he said we should have that meeting, said the price must remain ₦145, and we should look at how to make the product available and look at factors responsible for the shortage in the month of December. So, that is the only mandate we are discussing.

“The issue of pump price increase is not on the table now, nobody is contemplating that. The issue is not on the table, it is not contemplated at all. Let us limit ourselves to where we are because that gives room for speculation and the marketers begin to do what will not be favourable to consumers and the generality of the citizens.

“What is on the table now is to make products available at the prevailing rates. That is what everybody is aware of; anything outside that is not actually on the table and nobody is trying to bring it to the table. The Minister himself has addressed a press conference because of the misinformation by some media houses,” Wabba said.

Nigeria Labour Congress (NLC) has threatened to picket filling stations selling petrol above the ₦145 official pump prices. It remains to be seen whether pump price will still be increased or not.